Safety is Priority at Cassville Schools 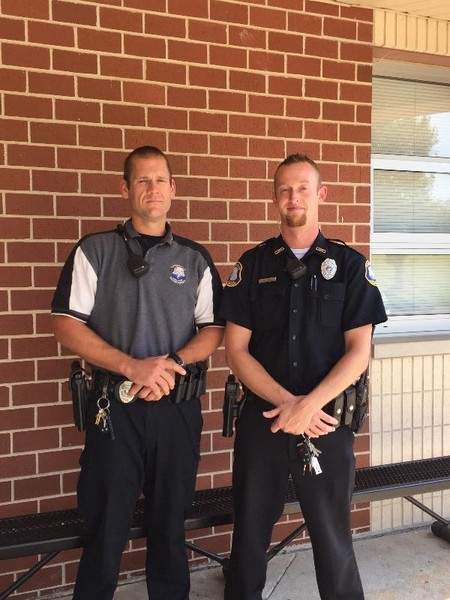 Both Officer Wenzel and Officer Beck are members of the CPD and will alternate each month serving as the Districts SRO. Their primary goal is to ensure the safety and well-being of the student body along with promoting positive relations between youth and law enforcement.

“Officer Wenzel is new to our department, however has law enforcement experience,” stated Chief of Police Dana Kammerlohr. “Officer Beck had inquired about the SRO position and was interested.  The school had approved having two officers share the position, so I decided to ask both men if they would be interested in doing this.  They both agreed they would like to try this arrangement.”

Wenzel became employed with CPD in August, however, has over eight years of experience in law enforcement. He was previously employed for the Carroll County Sherriff’s Department.

Beck has served with the CPD for nearly two years and has been in law enforcement for six years with his previous post at the Barry County Sherriff’s Department.

“Both Officers have out going personalities and are able to get along with people.  They are thorough in their work and motivated,” stated Chief Kammerlohr.

While the SRO office is in the High School, the officer on duty will spend time at all four campuses serving as a resource to students and faculty, patrolling parking lots and hallways, implementing K-9 searches, coordinating traffic control at the junction of Y Highway and Highway 37 and monitoring the cross-walk at the intersection of Main Street and 14th Street.

The SRO is also available to assist in the case of a medical emergency and will serve as security during sporting events that take place on campus.

“Safety for our students is priority at Cassville Schools,” stated Dr. Richard Asbill, Cassville R-IV Superintendent. “We value our partnership with the Cassville Police Department, Officer Wenzel and Officer Beck. They have an integral role in ensuring the safety of our students and staff, along with providing a vital educational component that will teach our students the importance of a healthy, safe lifestyle.”

Wenzel and Beck will be involved in the Students Against Destructive Decisions (SADD) Club along with providing assistance to DARE Officer Mike Moore with the Barry County Sherriff’s Department.

“This is the pro-active side of law enforcement, which is a nice change, rather than being reactive,” stated Chief Kammerlohr.

Both officers plan to attend the Missouri School Resource Association training in Jefferson City in December. The training is 40 hours and is provided by the Missouri Police Chief’s Association. Participants will study laws pertaining to juveniles as well as training in active shooter scenarios.